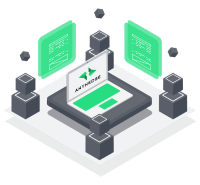 To understand the BCH Bull contract, it is important to first understand the terms "hedge" and "long" as they define the two parties making the contract together.

In BCH Bull, a hedge is an investment position intended to stabilize value in terms of an asset such as USD, Gold or others. No matter the price change of BCH in relation to the asset, the value of the hedge remains the same in terms of the asset. In other words, $100 of BCH in at the beginning, results in $100 of BCH out at the end. The stability is made possible through combination with the long counterparty position, whose profit-seeking position provides the BCH to guarantee the fixed asset payout despite price movements.

The AnyHedge protocol works by creating a balanced contract between two parties taking opposite positions on the trading price of an asset. One party, often seeking price stability in the chosen asset, hedges, whilst the other, speculating on price appreciation, longs through a leveraged position.

After contract parameters are agreed upon, both parties then commit the appropriate amount of Bitcoin Cash (BCH) to the on-chain contract simultaneously and trustlessly, with no counterparty or custodian. The funds locked within the contract now have enough BCH to cover all potential outcomes of price movements. For example, should the asset-per-bch price go up (asset value decreases) during the time period of the contract, at contract redemption, the hedge party will receive less BCH to receive exactly the same hedged asset value as they contracted for, whilst the long party will receive more BCH to ensure their leverage payout in the asset is met.

Conversely, the opposite happens when the asset-per-bch price goes down (asset value increases). In this case, the hedge party receives more BCH than they initially entered to cover the hedged asset value, whilst the long party receives less. In the circumstance the price drops beyond the liquidation point of the contract, the contract redeems early, all of the funds from both hedge and long are paid out to the hedge party to meet their hedging requirement, and the long party is liquidated, thus receiving no BCH.

BCH Bull utilises the AnyHedge protocol to instantly create on-chain smart contracts for users wishing to hedge or long. This is achieved with users creating their desired contract positions within the application, and a liquidity provider (LP) offering the counter-position required to fund the contract, with a premium fee set by the LP. This premium is set directly by the LP, and can either be positive (the user pays the fee), or negative (the user receives the fee), depending on the market conditions and the risk management of the LP.

To understand more specifically how the protocol works, here are some of the mathematics underpinning it.

AnyHedge simultaneously works in two assets, namely the chosen asset of the contract, and the funding asset, Bitcoin Cash. It is therefore important to understand how the contract payouts are calculated, both for the long party and the hedge party in both of these assets.

It is also important to remember each contract has a liquidation point, where the AnyHedge contract redeems early should the price of the asset drop below this point. Although the formulas below describe the payouts in asset and BCH terms for long and hedge users, they do not take into consideration the liquidation points for individual contracts.

THE FORMULA IN ACTION!

In the diagram below, we see the payout in the asset units as the price changes. As we can see, the hedge payout in units (red line) remains constant throughout the duration of the contract. However, the long payout varies throughout, depending on the price change. The total payout also changes with price performance in relation to Bitcoin Cash. 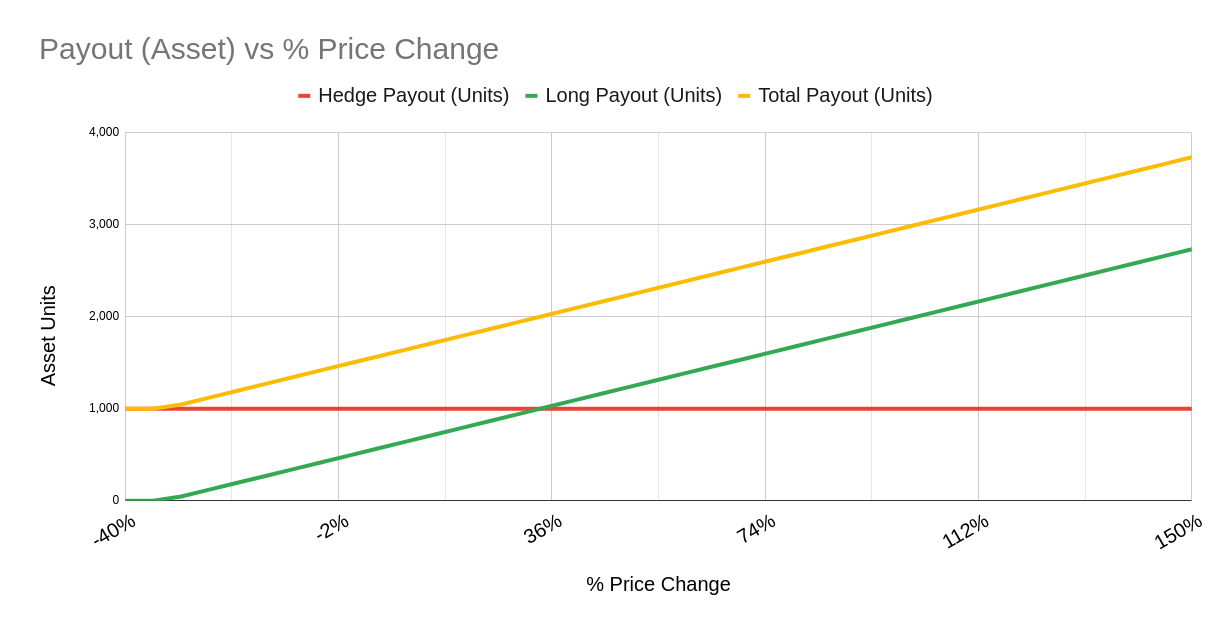 The payout in BCH terms looks very different. In the graph below, the total payout (yellow line) is the same throughout the duration of the contract - it is simply the amount of original BCH that hedge and long put into the contract. The long / hedge payouts reach a hard stop of liquidation at a certain level of price reduction (the image is only one example - the actual % depends on contract parameters), and on the other side, the payouts taper as the price increases. 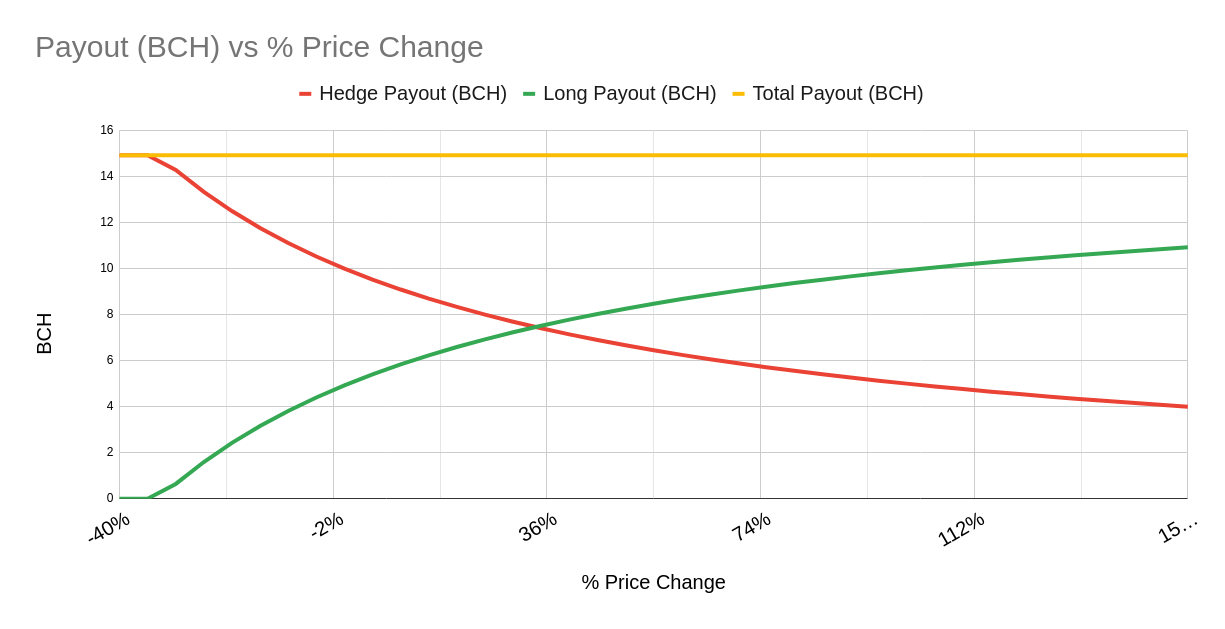 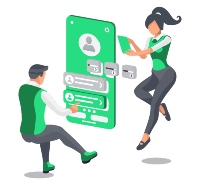 Alice uses the BCH Bull to stabilize the USD value of her Bitcoin Cash. She currently has 1 BCH, worth $100 and starts a hedge on BCH Bull. At the end of the contract, the price value of 1 BCH dropped to $90. Using the formula, here are her payouts:

Bob, on the other hand, thinks the price of BCH will go up relative to USD and wants to start a long. He has 1 BCH, worth $100, and creates a long position with 5x leverage. At the end of the contract, the price of 1 BCH rose to $110. Using the formula, here are his payouts:

Alice now decides to take a a long position on USD with 5x leverage. She starts a one-month contract with 1 BCH, worth $100 at the start of the contract. She is informed the liquidation point of her contract is if the USD/BCH price reaches $80. Unfortunately, during the time period, the price dipped to $80/BCH and Alice's contract was redeemed early, meaning the contract was liquidated and Alice received no BCH. Although the price of BCH did recover during the remainder of the one-month period, because the price had already reached the liquidation point, any price movement after liquidation no longer applied to the contract.

The above case examples do not consider any premiums that Alice and Bob paid to use the service.